Virtual reality (VR) has exploded in popularity in recent years. Despite its popularity, VR and its capabilities remain somewhat a mystery to some. In this blog post our expert answers to frequently asked questions concerning virtual reality.

Virtual reality (VR) has exploded in popularity in recent years. In the United States, for example, the Oculus Quest 2 VR glasses were one of the most popular Christmas gifts in 2021. Despite its popularity, VR and its capabilities remain somewhat a mystery to some. In this blog post, I’d like to tell you a bit more about VR and how you can use it to work, play and learn. These are the answers to frequently asked questions concerning VR.

💬 What is the difference between VR and AR?

When you put on VR glasses, you can totally immerse yourself in a new virtual world. You can explore, learn and play in a totally different environment just by turning your head around. With VR glasses, you can look left, right, up, down, front, or back and see in 360 degrees.

Augmented Reality (AR), on the other hand, allows you to see 3D models or digital components as an overlay on your environment. Instagram filters are the most basic and widely used example of AR; you may use them to enhance your appearance.

💬 How can you use VR other than for gaming?

It’s unsurprising that VR is primarily known for its gaming potential; the VR gaming market was valued at 11.5billion USD in 2019 alone (Virtual Reality In Gaming Market Size Report, 2020-2027 ). However, VR is not only for games! Opportunities of VR are endless. It’s helping designers to visualize 3D objects easier, to participate in virtual meetings, or program inside VR.

For example, Turkish farmers are even putting VR glasses on cows to make them produce more milk. Pandemic lockdowns led to a boom in VR tech uptake and how well VR can simulate real-life environments such as concerts, museum exhibits and art galleries.

💬 How companies can utilize VR/AR?

Showing things in 3D mode allows better visualisation of the objects, landscapes and environment – What could be more impressive than showing a virtual prototype or service in VR to potential customers? What if you could bring that virtual prototype or service to market sooner? This report shows that companies using VR in their prototype stage are bringing higher-quality products to market sooner than traditional prototyping methods.

Expensive specialist training can be simulated more cheaply using VR. For example, you can simulate flight, or train your employees on how to run metal 3D printing machine, how to behave in factory emergency situations, and even how to work in remote locations such as oil rigs.

Digital twins can be used to visualize physical assets and represent models in digital environments. The real world can be controlled in VR with help of physical devices. These can be used in many ways; from home automation, such as cooking a pizza, to production monitoring, such as controlling factory processes.

With the help of 3D scanning, you can make your own digital twin, the avatar and put it in VR.  One example of digital twin project in University of Vaasa is DIGI-MODE – Home 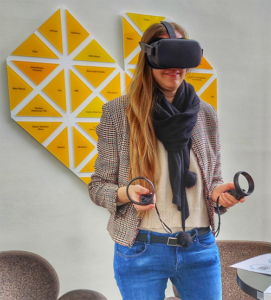 In virtual reality you can meet up with friends and make new ones and enjoying a range of different experiences together.  You can even change your appearance, creating a whole new identity for yourself.

💬 Can you tell me some existing examples of VR applications?

Here, I’d like to introduce you to two interesting VR apps and experiences.

This is one of our favourite VR games for introducing people to VR for the first time. This game allows you to really explore what’s possible in VR; you can shoot arrows using a bow, write on a chalkboard, play fetch with a robot dog and even deconstruct a robot. Sometimes the arrow and bow game feels like a decent workout because if you strive too hard, you’ll have slight muscle soreness in your hands and shoulders. Thus, the lab is a great representation of what you can do with the trackers in VR.

This is one of the most popular games in VR in part because it’s a multiplayer game and allows for collaboration with others. You can build your own socializing spaces in the Rec Room, play paintball, parachute and even program within VR using this game, if you have some programming knowledge.

Another reason why it is so popular, because is growing so fast. It is growing, because people can create themselves. They can open a new room, and with the maker pen they can start drawing, or adding things like sofas, chairs, tables, etc. It is also possible to program in VR, so you can create your own experiences with a little bit of programming knowledge. Thus, we could consider “the rec room” as a platform for collaborative user innovations and co-creation.

💬 How we can teach and learn better while using VR? 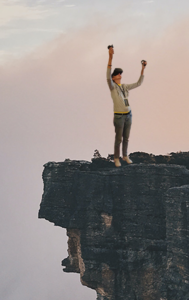 VR could help make teaching and learning more engaging. In the era of online calls, VR could make virtual meetings and classes more fun; for example, VR avatars can add fun and humour to social interactions with classmates.

In biology, for example, you can learn about the anatomy of the human body by watching different layers of the body. Surgeons, for example, can rehearse surgery before the actual procedure. Astronomy is another example. Learning about the planets in school, as well as their sizes and distances from Earth and the Sun, can be challenging.

In The Lab application, for example, you can stand next to planets, see how they revolve around the Sun, how big they are in comparison to the Earth and the Sun. You can take each planet in your hand and look at it.

This immersive approach to learning can help you to understand better and learn faster.

With the help of VR I’ve already travelled to numerous countries, jumped with a parachute, climbed Mount Everest, walked around an oil rig, was fighting with Darth Vader, and have been an astronaut on a space mission.

Vr is fun and takes you to different worlds in a matter of seconds. Sometimes you even end up with funny stories…My interesting immersive experiences in VR:

💬 How Can I Use the VR Equipment at the VME?

It’s not difficult at all to use VR equipment. You are welcome to come and use the VME’s equipment for free, including our VR tech.  Everyone’s welcome, whether you need to test a prototype, run simulations or even learn how to use some equipment before making any acquisitions of your own.

The opportunities of and ways to use VR are endless. With a help of VR, I’ve already travelled to numerous countries, jumped with a parachute, climbed Mount Everest, walked around an oil rig, was fighting with Darth Vader, and have been an astronaut on a space mission.

Come along to the VME Digital Interaction Environment and try out our VR equipment! I hope to see you soon! 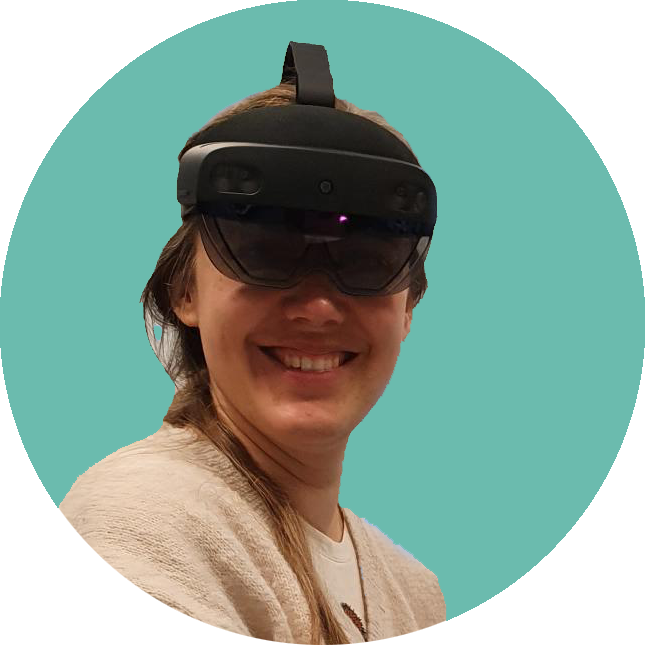 Vaiva Stanisauskaite is a Project Researcher in University of Vaasa and a part of VME crew. Her research interests are virtual and augmented reality, entrepreneurship, networks, innovations, business incubators, additive manufacturing, fab labs and makerspaces.