The first part of the renovation of the auditorium Levón was completed early in autumn 2020, and the implementation of the second part has begun. We decided to divide the renovation into two parts already at the planning stage to ensure the full-time use of the hall. This summer’s renovation will include the floors and benches of the hall. However, the new world situation raised the question of what kind of auditorium will be needed in the future.

Improving the efficiency of space use has been identified as a key objective of campus development. This means that the facilities would be used widely and empty as little as possible. The use of auditoriums has so far been very different from that of other premises. Between seminars, for example, Levón has been empty and without use for up to hours every day.

A modern hall for modern needs

As the campus development progressed, we reopened the discussion on the implementation of the second part of the Levón renovation. The ambitious idea emerged that we would make the hall more modern and multifunctional than defined in the original plans. Now the hall is being renovated by new visions.

The working name of the new plan is the vineyard (pictured). 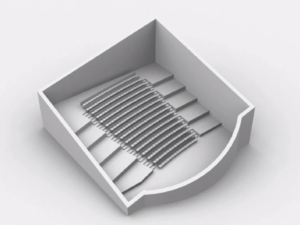 In addition to the traditional auditorium layout, there are flats on the edges of the hall where students can do group work and study when the hall is empty. The space solution also enables more versatile work on mass lectures, and also brings a new dimension to external events. The new look pays homage to the hall’s original architecture and preserves its dignity, but brings space to this decade.

The solution was reached because after the pandemic it is unlikely that 500 people can be in the same space tightly and safely at the same time. The new technology enables the performance to be distributed in Levón, with its sounds and images, to be transferred to the auditorium Wolff, allowing us to increase the number of seats safely. There is a need for a large hall, but the number of spectators and the nature of the events will certainly change. Based on these ideas, we set out to create something new.